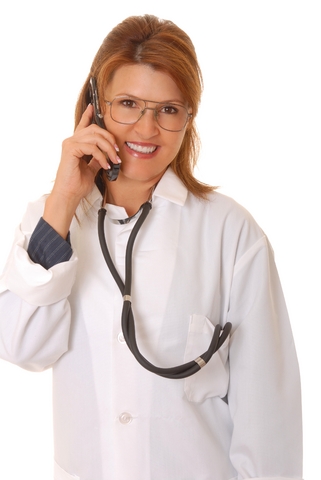 Doctors have been glued to cell phones since their inception. They are not, however, so bonded to their computers. Now that the two are converging, which handsets and which apps are the winners among the white-coats? In handsets, it’s a muddied draw. While many doctors are still carrying cell phones with only basic texting and email capabilities, the Blackberry and the iPhone are the top choices for doctors looking to maximize their profits and minimize their liabilities on the run.

Other smartphones such as the Palm Pre barely received mentions, either for or against, in MedTech Journal’s informal poll. While both Blackberry and iPhone have fevered fans in the medical community, the iPhone appears to be pulling ahead. The reason: partly the difference in interfaces but largely because of the apps available.

“The BlackBerry is a good machine but the interface is much more cumbersome and there is a much greater variety of apps available for the iPhone,” says Silicon Valley physician Richard O’Leary, M.D., an anesthesiologist.

That opinion was repeatedly expressed by poll participants.

Last year Rick Johnson, M.D., F.A.A.P., Assistant Professor of Pediatrics at the University of Connecticut School of Medicine and Division Head of Regional Pediatrics, Attending Faculty at Connecticut Children's Medical Center found himself using the Blackberry and the iPhone simultaneously for three months. “There simply was no contest,” he says. “The iPhone user interface is hands down easier and quicker to use. Its use is just intuitive - no need to look at complicated manuals in order to learn how to use the device.”

The list of acclaims for the iPhone outweighed those of any other phone by three to one even though the actual vote count measured the Blackberry and the iPhone in a seemingly close race.

“I am an Otolaryngologist - Head and Neck Surgeon and the iPhone has been a fantastic addition to my practice,” says Eric Pinczower, MD.

Blackberry fans tended to be doctors who work with documents a lot and thus preferred the devices with Qwerty keyboards.

“As a concierge doctor who only makes house-calls, I have to be super available to my patients,” explains Andrew Oakes-Lottridge, MD. “I love my BlackBerry. With the full keyboard I can quickly reply to patient’s emails and communicate with my office staff when I’m on the road making home visits. I use it for scheduling, email, contacts, and link it with my office so it synchronizes automatically. Email comes to the BlackBerry faster than it appears in my Outlook inbox.”

“Palms and iPhones may be pretty, but if you need your cell phone for business, there’s nothing like the BlackBerry,” says Oakes-Lottridge.

Favored apps were a little less contested. While some apps like Epocrates RX are available for a variety of phones, most physicians in our poll preferred the large range of apps offered on iPhone. According to a report by Ben Lorca at O’Reilly Radar, the number of medical applications for the iPhone grew almost 133 percent in the last three months. That kind of growth is undoubtedly difficult for other developers to keep up with but it remains a major draw for medical users.

“I believe strongly that the iPhone device and application platform will revolutionize how we practice medicine in terms of safety, efficiency, and quality of care,” says Dr. Johnson.

Among the leading apps cited by physicians in the poll (in no particular order):

click me
PMG360 is committed to protecting the privacy of the personal data we collect from our subscribers/agents/customers/exhibitors and sponsors. On May 25th, the European's GDPR policy will be enforced. Nothing is changing about your current settings or how your information is processed, however, we have made a few changes. We have updated our Privacy Policy and Cookie Policy to make it easier for you to understand what information we collect, how and why we collect it.
Ok Decline